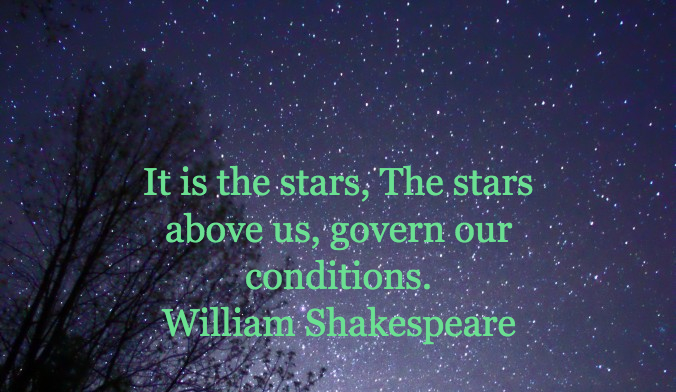 There’s nothing wrong with shooting for the stars.

Stretching his hand up to reach the stars, too often man forgets the flowers at his feet.

I’m not going to get somewhere and say, ‘OK, I’m done.’ Success is never final; I’ll just keep on going. The same way as failure never being fatal. Just keep going. I’m going to the stars and then past them.

Those fields of daisies we landed on, and dusty fields and desert stretches. Memories of many skies and earths beneath us – many days, many nights of stars.

The stars don’t look bigger, but they do look brighter.

Nations, like stars, are entitled to eclipse. All is well, provided the light returns and the eclipse does not become endless night. Dawn and resurrection are synonymous. The reappearance of the light is the same as the survival of the soul.

Those are the same stars, and that is the same moon, that look down upon your brothers and sisters, and which they see as they look up to them, though they are ever so far away from us, and each other.

There is stardust in your veins. We are literally, ultimately children of the stars.

Humanity has the stars in its future, and that future is too important to be lost under the burden of juvenile folly and ignorant superstition.

Set your course by the stars, not by the lights of every passing ship.

God who is eternally complete, who directs the stars, who is the master of fates, who elevates man from his lowliness to Himself, who speaks from the cosmos to every single human soul, is the most brilliant manifestation of the goal of perfection.

Astronomers can look back in time. We can look at things as they used to be. We have an idea there was a Big Bang explosion 13.7 billion years ago. We have a story of how galaxies and stars were made. It’s an amazing story.

String theory has the potential to show that all of the wondrous happenings in the universe – from the frantic dance of subatomic quarks to the stately waltz of orbiting binary stars; from the primordial fireball of the big bang to the majestic swirl of heavenly galaxies – are reflections of one, grand physical principle, one master equation.

The most remarkable discovery in all of astronomy is that the stars are made of atoms of the same kind as those on the earth.

Too low they build, who build beneath the stars.

Shoot for the moon – if you miss you’ll end up in the stars.

I am deeply grieved by the loss of the crew of Columbia. I express my sincere condolences to the families and friends of the astronauts. I believe that their names will remain as the bright sparkling stars in the universe and will light the way for those who will follow them on the difficult roads of space exploration.

There have to be reasons that you get up in the morning and you want to live. Why do you want to live? What’s the point? What inspires you? What do you love about the future? If the future does not include being out there among the stars and being a multi-planet species, I find that incredibly depressing.

As a soccer player, I wanted an FA Cup winner’s medal. As an actor you want an Oscar. As a chef it’s three-Michelin’s stars, there’s no greater than that. So pushing yourself to the extreme creates a lot of pressure and a lot of excitement, and more importantly, it shows on the plate.

Things are as they are. Looking out into it the universe at night, we make no comparisons between right and wrong stars, nor between well and badly arranged constellations.

And New York is the most beautiful city in the world? It is not far from it. No urban night is like the night there… Squares after squares of flame, set up and cut into the aether. Here is our poetry, for we have pulled down the stars to our will.

I think you should aim for the stars – and hopefully avoid ending up in the clouds!

Children will always be afraid of the dark, and men with minds sensitive to hereditary impulse will always tremble at the thought of the hidden and fathomless worlds of strange life which may pulsate in the gulfs beyond the stars, or press hideously upon our own globe in unholy dimensions which only the dead and the moonstruck can glimpse.

I’d rather learn from one bird how to sing than teach ten thousand stars how not to dance.

Quietness is the beginning of virtue. To be silent is to be beautiful. Stars do not make a noise.

Reach for the stars.

People commonly travel the world over to see rivers and mountains, new stars, garish birds, freak fish, grotesque breeds of human; they fall into an animal stupor that gapes at existence and they think they have seen something.

Jump into the middle of things, get your hands dirty, fall flat on your face, and then reach for the stars.

Even these stars, which seem so numerous, are as sand, as dust – or less than dust – in the enormity of the space in which there is nothing.

Do not look at stars as bright spots only. Try to take in the vastness of the universe.

O, thou art fairer than the evening air clad in the beauty of a thousand stars.

I believe a leaf of grass is no less than the journey-work of the stars.

Look out into the universe and contemplate the glory of God. Observe the stars, millions of them, twinkling in the night sky, all with a message of unity, part of the very nature of God.

It’s funny, because there are so many stereotypes out there about actors and movie stars in general, but I’ve had a great opportunity to meet a lot of them, and maybe it’s just because they don’t behave that way around me, but I rarely see that kind of abuse of power.

Our flag honors those who have fought to protect it, and is a reminder of the sacrifice of our nation’s founders and heroes. As the ultimate icon of America’s storied history, the Stars and Stripes represents the very best of this nation.
Joe Barton

We are all of us stars, and we deserve to twinkle.

I have lived pain, and my life can tell: I only deepen the wound of the world when I neglect to give thanks the heavy perfume of wild roses in early July and the song of crickets on summer humid nights and the rivers that run and the stars that rise and the rain that falls and all the good things that a good God gives.

When we contemplate the whole globe as one great dewdrop, striped and dotted with continents and islands, flying through space with other stars all singing and shining together as one, the whole universe appears as an infinite storm of beauty.

Enthusiasm is the yeast that makes your hopes shine to the stars. Enthusiasm is the sparkle in your eyes, the swing in your gait. The grip of your hand, the irresistible surge of will and energy to execute your ideas.

There could be shadow galaxies, shadow stars, and even shadow people.

You can be the moon and still be jealous of the stars.

Yeah we all shine on, like the moon, and the stars, and the sun.
John Lennon

I hope to continue to inspire our nation’s youth to pursue careers in science, technology, engineering, and math so they, too, may reach for the stars.

Stars that shine bling in the moon night, might I find true love sqirreled away tonight?

When virtue and modesty enlighten her charms, the lustre of a beautiful woman is brighter than the stars of heaven, and the influence of her power it is in vain to resist.

To find the universal elements enough; to find the air and the water exhilarating; to be refreshed by a morning walk or an evening saunter… to be thrilled by the stars at night; to be elated over a bird’s nest or a wildflower in spring – these are some of the rewards of the simple life.
John Burroughs

The connection to place, to the land, the wind, the sun, stars, the moon… it sounds romantic, but it’s true – the visceral experience of motion, of moving through time on some amazing machine – a few cars touch on it, but not too many compared to motorcycles. I always felt that any motorcycle journey was special.

At night, when the sky is full of stars and the sea is still you get the wonderful sensation that you are floating in space.

If there were no night, we would not appreciate the day, nor could we see the stars and the vastness of the heavens. We must partake of the bitter with the sweet. There is a divine purpose in the adversities we encounter every day. They prepare, they purge, they purify, and thus they bless.

Happiness is actually found in simple things, such as taking my nephew around the island by bicycle or seeing the stars at night. We go to coffee shops or see airplanes land at the airport.

I’m a dreamer. I have to dream and reach for the stars, and if I miss a star then I grab a handful of clouds.

Oh, don’t let’s ask for the moon. We’ve already got the stars.


Shoot for the moon and if you miss you will still be among the stars.

It is not in the stars to hold our destiny but in ourselves.


Look up at the stars and not down at your feet. Try to make sense of what you see, and wonder about what makes the universe exist. Be curious.

I’m glad I was born when I was. My time was the golden age of variety. If I were starting out again now, maybe things would happen for me, but it certainly would not be on a variety show with 28 musicians, 12 dancers, two major guest stars, 50 costumes a week by Bob Mackie. The networks just wouldn’t spend the money today.

Keep your eyes on the stars, and your feet on the ground.

We need to find God, and he cannot be found in noise and restlessness. God is the friend of silence. See how nature – trees, flowers, grass- grows in silence; see the stars, the moon and the sun, how they move in silence… We need silence to be able to touch souls.