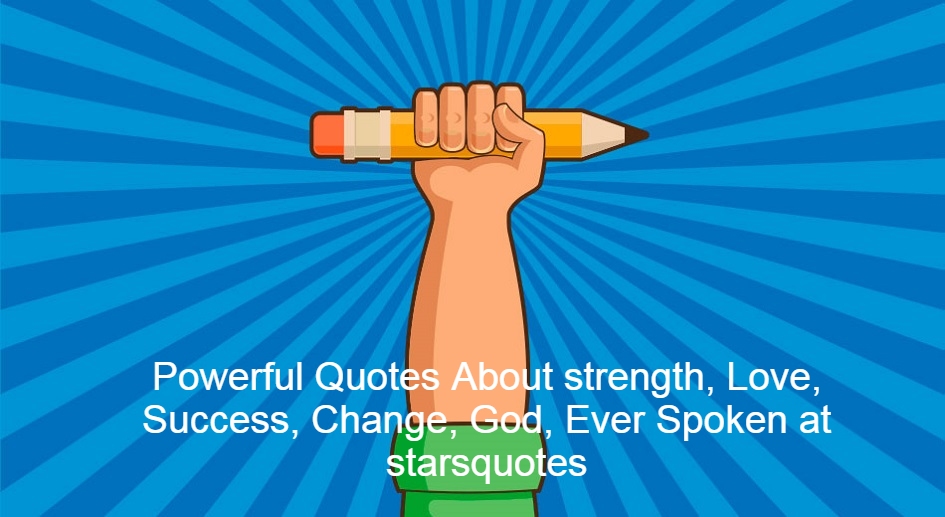 Powerful Quotes About strength, Love, Success, Change, God, Ever Spoken are read below.

A ship is safe in harbor, but that’s not what ships are for.

I start early and I stay late, day after day, year after year, it took me 17 years and 114 days to become an overnight success.


A mind that is stretched by a new experience can never go back to its old dimensions.

If I had asked people what they wanted, they would have said, ‘Faster horses’.

A tiger doesn’t lose sleep over the opinion of sheep.

Kindness is a language that the deaf can hear and the blind can see.

The idea is to die young as late as possible.

Somewhere in the world someone is training when you are not. When you race him, he will win.

If you always put limit on everything you do, physical or anything else, it will spread into your work and into your life. There are no limits. There are only plateaus, and you must not stay there, you must go beyond them.

There ain’t no problem that some other dude didn’t have 1,000 years ago.

Some people think that if their opponent plays a beautiful game, it’s OK to lose. I don’t. You have to be merciless.

One day your life will flash before your eyes. Make sure it’s worth watching.

Education is not the filling of a pail, but the lighting of a fire.


Integrity is doing the right thing, even when no one is watching.

People often become what they believe themselves to be. If I believe I cannot do something, it makes me incapable of doing it. But when I believe I can, then I acquire the ability to do it even if I didn’t have it in the beginning.

I hated every minute of training, but I said, ‘Don’t quit. Suffer now and live the rest of your life as a champion.

I would rather die a meaningful death than to live a meaningless life.

Pay attention to your enemies, for they are the first to discover your mistakes.

Be like the flower that gives fragrance even to the hand that crushes it.

Failure is simply the opportunity to begin again, this time more intelligently.

The greatest mistake you can ever make in life is to be continually fearing that you will make one.

Being realistic is the most common path to mediocrity.


It is impossible to live without failing at something, unless you live so cautiously that you might as well not have lived at all – in which case, you fail by default.

Sometimes I want to ask God why He allows poverty, famine, and injustice when He could do something about it, but I’m afraid he might just ask me the same question.

Opportunity is missed by people because it is dressed in overalls and looks like work.

It has been said that a person may have ten years of experience, or one year of experience repeated ten times.

Remembering that you are going to die is the best way I know to avoid the trap of thinking you have something to lose. You are already naked. There is no reason not to follow your heart.

As men grow old enough to look back on their lives, any pain they have does not come from the things at which they failed, but the things they never tried.

Courage isn’t having the strength to go on – it is going on when you don’t have strength.

If you don’t turn your life into a story, you just become a part of someone else’s story.

When you realize how perfect everything is, you will tilt your head back and laugh at the sky.

Everything should be made as simple as possible, but no simpler.

What would you attempt to do if you knew you could not fail?

It is never too late to be what you might have been.

Talent is luck. The important thing in life is courage.

Not until we are lost, do we begin to find ourselves.

I don’t know what frightens me more, the power that crushes us, or our endless ability to endure it.

The most important things are the hardest to say because words diminish them.

Turn your face to the sun and the shadows fall behind you.

I have never in my life learned anything from any man who agreed with me.

Certain things catch your eye, but pursue only those that capture the heart.

Challenges are what make life interesting and overcoming them is what makes life meaningful.

You cannot swim for new horizons until you have courage to lose sight of the shore.

Life is never made unbearable by circumstances, but only by lack of meaning and purpose.

Can you imagine what I would do if I could do all I can?

Believe you can and you’re halfway there.

One man with courage makes a majority.

Know the rules well, so you can break them effectively.

Success is going from failure to failure without losing your enthusiasm.

Remember that happiness is a way of travel, not a destination.

When one door of happiness closes, another opens, but often we look so long at the closed door that we do not see the one that has been opened for us.

Yesterday is history, tomorrow is a mystery, today is a gift of God, which is why we call it the present.

Never underestimate the power of dreams and the influence of the human spirit. We are all the same in this notion: The potential for greatness lives within each of us.

Every moment is a fresh beginning.

Normality is a paved road: it’s comfortable to walk but no flowers grow.

Turn your wounds into wisdom.

You must be the change you wish to see in the world.

Everybody is a genius. But if you judge a fish by its ability to climb a tree, it will live its whole life believing that it is stupid.

A life spent making mistakes is not only more honorable, but more useful than a life spent doing nothing.

He who fears he will suffer, already suffers because he fears.

Before you diagnose yourself with depression or low self-esteem, first make sure that you are not, in fact, just surrounded by assholes.

We think sometimes that poverty is only being hungry, naked and homeless. The poverty of being unwanted, unloved and uncared for is the greatest poverty.

If you don’t like something, change it. If you can’t change it, change the way you think about it.

In seeking happiness for others, you will find it in yourself. Unknown