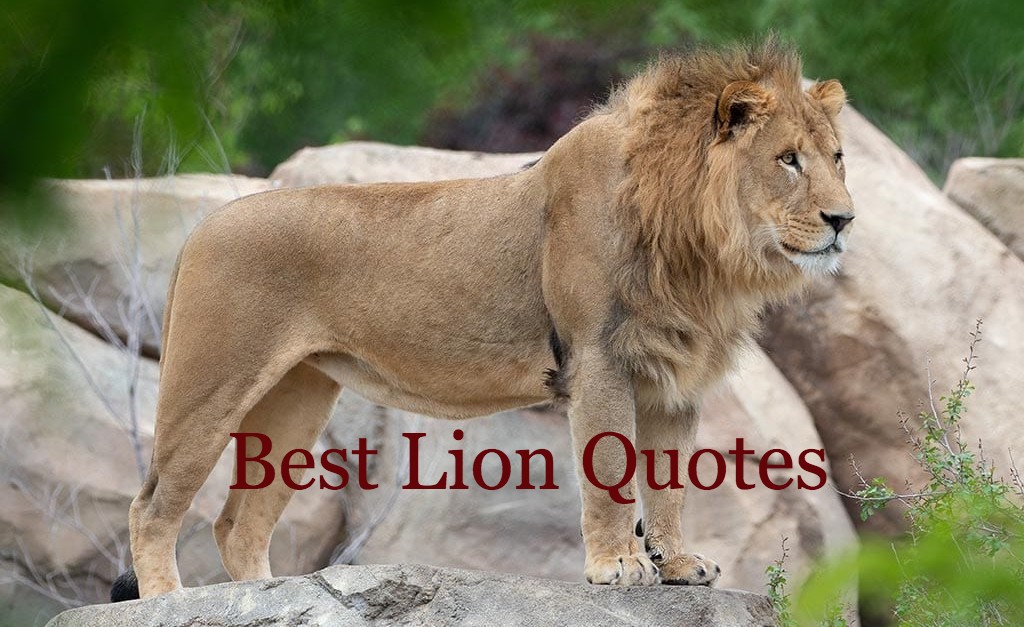 After The Wizard Of Oz I was typecast as a lion, and there aren’t all that many parts for lions.

That was my one big Hollywood hit, but, in a way, it hurt my picture career. After that, I was typecast as a lion, and there just weren’t many parts for lions.

What happens when you take a lion out of the safari and try to take him to your place of residence and make him a house pet? It ain’t going to happen. That’s the type of person that I am. I’m that lion.

There are no lazy veteran lion hunters.

A lion runs the fastest when he is hungry.

Justice Scalia was a lion of the law. Agree or disagree with him, all of his colleagues on the bench shared his wisdom and his humor. And like them, I miss him.

I’ve never read ‘The Lion, The Witch And The Wardrobe,’ but his later works are about whether God is real.

Though every nation must do its part to address climate change, developed nations are responsible for the lion’s share of carbon pollution in the atmosphere, and they have an obligation to help developing nations transition to a sustainable future.

A lion’s work hours are only when he’s hungry; once he’s satisfied, the predator and prey live peacefully together.

People go to the zoo and they like the lion because it’s scary. And the bear because it’s intense, but the monkey makes people laugh.

In ancient African cultures, a young man was not considered a full member of the tribe, an elder, a man. He couldn’t marry and he couldn’t own land until he had killed a lion. It was symbolic.

To achieve the mood of a warrior is not a simple matter. It is a revolution. To regard the lion and the water rats and our fellow men as equals is a magnificent act of a warrior’s spirit. It takes power to do that.

I refuse to be outworked, and I consider myself to have the heart of a lion.

As far as a nuclear weapons-free zone, you know, when the lion lies down with the lamb, and you don’t need a new lamb every day to satisfy the lion, then we might have this kind of transformation in the Middle East.

The holder of authority is like the rider on a lion – he is envied for his position, but he well knows his position.

Do I believe in arbitration? I do. But not in arbitration between the lion and the lamb, in which the lamb is in the morning found inside the lion.

Across society, the lion’s share of caring responsibility – whether for children or elderly relatives – still falls on women.

I love watching the Serengeti, the way lions live. The only way the king lion loses his crown is by somebody physically defeating him.

I was the shyest human ever invented, but I had a lion inside me that wouldn’t shut up!

Lion’s mane may be our first ‘smart’ mushroom. It is a safe, edible fungus that appears to confer cognitive benefits on our aging population.

Lion sounds that have not grown from the mouse may exude naked power… but cannot convey any wisdom or understanding… The initial steps on the path to courageous speech then are the first tentative steps into the parts of us that cannot speak.

Lion’s mane mushrooms are not your classic-looking cap-and-stem variety. These globular-shaped mushrooms sport cascading teeth-like spines rather than the more common gills.

Mushrooms provide a vast array of potential medicinal compounds. Many mushrooms – such as portobello, oyster, reishi and maitake – are well-known for these properties, but the lion’s mane mushroom, in particular, has drawn the attention of researchers for its notable nerve-regenerative properties.

All species capable of grasping this fact manage better in the struggle for existence than those which rely upon their own strength alone: the wolf, which hunts in a pack, has a greater chance of survival than the lion, which hunts alone.

The more we allow Republicans to concentrate the lion’s share of wealth in the hands of a few, the more power these wealthy few will have. And they will use this power to continue rewriting the rules of both our economy and our political system in their favor.

The frail, vulnerable sounds of which we are capable seem to be essential to a later ability to roar like a lion without scaring everyone to death.

It’s better to be a lion for a day than a sheep all your life.

Going into a locker room that’s not even yours to begin with is certainly like you’re entering the lion’s den.

Mostly I make lists for projects. This can be daunting. Breaking something big into its constituent parts will help you organize your thoughts, but it can also force you to confront the depth of your ignorance and the hugeness of the task. That’s OK. The project may be the lion, but the list is your whip.

Even when I went to the Lion’s Head in the Village, where all you journalists would hang out, I was always peripheral. I was never really part of anything except the classroom. That’s where I belonged.

Have you recently been through a challenge, disappointment, break up or disloyalty with somebody in your life? If so, it’s important after you’ve been hurt, to take some time to think like a lion tamer about your pain, so you can tame the possibility of more negativity coming back to bite you again!

I’ve got a friend who is a lion tamer. He used to be a school teacher till he lost his nerve.

An optimist is someone who gets treed by a lion but enjoys the scenery.

I don’t mind going into a liberal lion’s den. That’s where you test yourself.

Funny enough, you know who I used to really like in Lion King? It was Scar.

Of course my uncle was a giant, but my dad, in particular, had the house filled with these great Dixieland jazz stars, really the best of them: Henry Red Allen, Willie ‘The Lion’ Smith, Buster Bailey, Cutty Cutshall, Tyree Glenn, Zutty Singleton. These are all big names in the Dixieland world.

In boxing, it is about the obsession of getting the most from yourself: wanting to dominate the world like a hungry young lion.

The severity of punishments ought to be relative to the state of the nation itself. Stronger and more easily felt impressions have to be made on a people only just out of the savage state. A lightning strike is needed to stop a fierce lion who is provoked by a gunshot.

When I have bad days, I just eat lots of chocolate ice cream and dance to the ‘Lion King’ soundtrack. It’s really odd, but it’s true.

When I was a kid, I worked in the circus. It was a touring circus that was owned by a man named Terrell Jacobs. It was just one big tent, and he was a lion tamer. He didn’t have any kids, but the bit was that I would dress up as his son in an identical outfit.

Vegetarians are cool. All I eat are vegetarians – except for the occasional mountain lion steak.

I carry around this little lion named Leo, which I’ve had for as long as I can remember.

Roused by the lash of his own stubborn tail our lion now will foreign foes assail.

For us in Russia, communism is a dead dog, while, for many people in the West, it is still a living lion.

Don’t ask me who’s influenced me. A lion is made up of the lambs he’s digested, and I’ve been reading all my life.

If a lion could talk, we could not understand him.

I was once, I think, bitten on the nose by a lion cub.

At twenty a man is a peacock, at thirty a lion, at forty a camel, at fifty a serpent, at sixty a dog, at seventy an ape, at eighty a nothing at all.

Dressed in the lion’s skin, the ass spread terror far and wide.

Fear not, we are of the nature of the lion, and cannot descend to the destruction of mice and such small beasts.

Shall we, who have laid the proud British lion at our feet, now be afraid of his whelps?

It started to weigh on me that I was responsible for the moves that had made me successful, but I wasn’t reaping the lion’s share of the profits, and that was problematic for me.

You may as well say, ‘That’s a valiant flea that dare eat his breakfast on the lip of a lion.

It started to weigh on me that I was responsible for the moves that had made me successful, but I wasn’t reaping the lion’s share of the profits, and that was problematic for me.

The one excellent thing that can be learned from a lion is that whatever a man intends doing should be done by him with a whole-hearted and strenuous effort.

I am impelled, not to squeak like a grateful and apologetic mouse, but to roar like a lion out of pride in my profession.

The lion and the calf shall lie down together but the calf won’t get much sleep.

The lion and the calf shall lie down together but the calf won’t get much sleep.

Those who are preparing for the coming of Christ should be sober, and watch unto prayer, for our adversary, the Devil, goeth about like a roaring lion, seeking whom he may devour; whom we are to resist steadfast in the faith.

The real power of the Buddha was that he had so much love. He saw people trapped in their notions of small separate self, feeling guilty or proud of that self, and he offered revolutionary teachings that resounded like a lion’s roar, like a great rising tide, helping people to wake up and break free from the prison of ignorance.

I never thought much of the courage of a lion tamer. Inside the cage he is at least safe from people.

‘The Lion’ all began with a picture of a faun carrying an umbrella and parcels in a snowy wood. This picture had been in my mind since I was about sixteen. Then one day, when I was about forty, I said to myself, ‘Let’s try to make a story about it.’

It was the nation and the race dwelling all round the globe that had the lion’s heart. I had the luck to be called upon to give the roar.

I think Clinton, after getting into office and into Washington, was shocked at being bludgeoned. So he spent time trying to be all things to all people – one way guaranteed not to be successful or respected in a lion’s den. You can’t just play around with all those big cats – you’ve got to take somebody on.

‘A living dog is better than a dead lion.’ Judge Douglas, if not a dead lion for this work, is at least a caged and toothless one. How can he oppose the advances of slavery? He don’t care anything about it.

I am sometimes a fox and sometimes a lion. The whole secret of government lies in knowing when to be the one or the other.