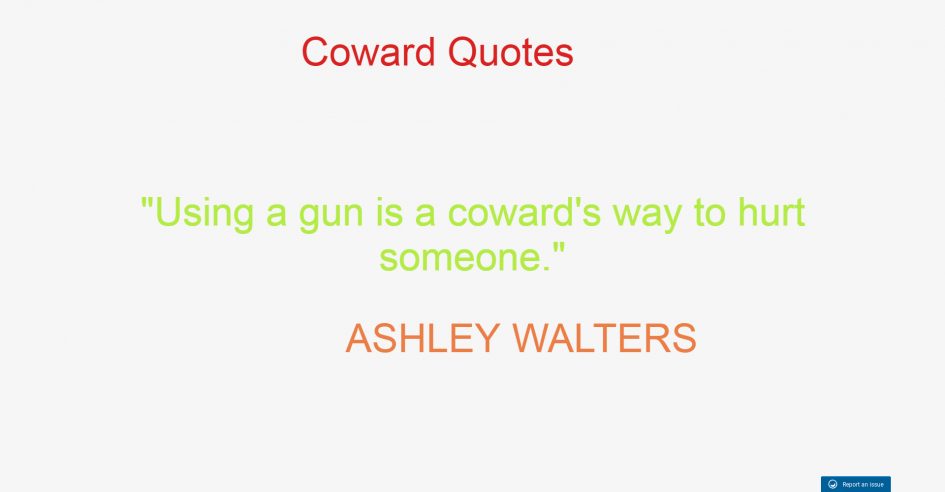 If you leave without a fight, you will get the name of a coward.

I am actually a terrible coward. Fear is a constant fact of my life.

I’ve rarely gotten a good review in my life, yet, to paraphrase Noel Coward, I am happy to console myself with the bitter palliative of commercial success.

It is better to be the widow of a hero than the wife of a coward.

I love watching ‘UFC’ – Ultimate Fighting Championship – I don’t know why, because I’m more of a coward than a fighter, but I seem to be very drawn to these blokes actually smashing each other to bits.

Mr. Snowden is a coward who has chosen to run.

I run; I am a coward at heart. I swear, when I smell violence or aggression the coward comes out in me. I have no desire to fight anybody except myself.

I am such a coward when it comes to political arguments. I tend to sort of recoil rather than engage.

Only a coward will use a gun to protect and get respect for themselves.

Courage and conviction are powerful weapons against an enemy who depends only on fists or guns. Animals know when you are afraid; a coward knows when you are not.

I am all for cracking down on inappropriate digital behaviour. Too often the connected world is an excuse for some coward hiding behind a keyboard to bully someone else.

If any man has left us for fear of Nero, I shall not account him a coward; but I shall hail as a philosopher any man who has been superior to this fear, and I shall teach him all I know.

I’m not the type of person to give up just because something gets rough. That’s a coward. That’s not me.

Since cowardice must occur at a time and place where an enemy either has already appeared or may yet turn up, servicemen in peacetime – and ordinary civilians – can breathe a sigh of relief. If you are yellow-bellied back home, you’re not technically a coward.

Whatever any boxer does in the ring, I don’t think any reporter should call him a coward. Anyone who does that I lose complete respect for. There’s a difference between being a coward and being scared, or apprehensive. Different fighters have got different mentalities.

Using a gun is a coward’s way to hurt someone.

Even if you’ve been a coward all your life, death is a heroic act.

The first play I ever saw – I was in junior high school – was a high school production of Noel Coward’s ‘Blithe Spirit,’ which seemed to me absolutely magical.

Slow, skinny, and an utter countryside coward: I lived in dread of nettles, spiders, and the very sound of a wasp. As a victim, I was beneath the dignity of the bullies in my year but fair game to the ones in the year below.

Hey, I’m like the Wayne Gretsky of the entertainment biz – I have other people do my dirty work while I skate around and get to be a nice guy. What can I say? I’m a coward.

To be called a coward, I don’t think that’s fair.

I guess I wanted to show people, among other things, that you don’t have to be a hero to get through cancer. You can be a craven coward and get through. You have to stay on your medication and take your treatments, that’s all.

I’m not temperamentally into high comedy. I’m not a Noel Coward kind of girl.

The real hero is always a hero by mistake; he dreams of being an honest coward like everybody else.

Only the brave know how to forgive… a coward never forgave; it is not in his nature.

A dog barks when his master is attacked. I would be a coward if I saw that God’s truth is attacked and yet would remain silent.

While President Bush likes to project an image of strength and courage, the real truth is that in the presence of his large financial contributors, he is a moral coward.

All trembling, I reached the Falls of Niagara, and oh, what a scene! My blood shudders still, although I am not a coward, at the grandeur of the Creator’s power; and I gazed motionless on this new display of the irresistible force of one of His elements.

I would say that the war correspondent gets more drinks, more girls, better pay, and greater freedom than the soldier, but at this stage of the game, having the freedom to choose his spot and being allowed to be a coward and not be executed for it is his torture.

A sniper’s primary goal is to eliminate ground threats for U.S. guys on the ground. Is that what a coward is? A person whose goal is to save the lives of his warrior brothers?

I was a bit of a coward when I was small. I was terribly frightened of the dark.

I’m a bit of a coward, and lazy, oddly enough.

President Kennedy was willing to go to war. He was not a coward. The man had been in war and so had Ken O’Donnell. He was ready to protect this nation, but he was not ready for a military solution just because it was being rammed down his throat.

I am not a coward.

A timid person is frightened before a danger, a coward during the time, and a courageous person afterward.

I’m a charming coward; I fight with words.

I’d like to see one person – just one – who would own up to having been a coward.

Timothy McVeigh was a coward. Violence is the stupid way out. It’ll discredit any real legitmate movement.

You know what, I’m a big coward and I’m really afraid of live audiences.

The difference between a hero and a coward is one step sideways.

To be scrupulously honest, I only met Noel Coward twice in my life, and then briefly, but I heard so much about him at home when I was growing up that I always felt I knew him well.

There have been many gay knights in the past – like Sir Noel Coward or Sir John Gielgud.

You write in songs what you’re too scared to write in real life, and then you sing the songs to loads of people instead of telling it to the person you should be telling it to… Songs are a great way of dealing with those issues but kind of a coward’s way as well.

I’m such a coward that unless I get a good writer, I don’t want to make a picture.

Battle is the most magnificent competition in which a human being can indulge. It brings out all that is best; it removes all that is base. All men are afraid in battle. The coward is the one who lets his fear overcome his sense of duty. Duty is the essence of manhood.

That man is not truly brave who is afraid either to seem or to be, when it suits him, a coward.

He who despairs of the human condition is a coward, but he who has hope for it is a fool.

A coward is incapable of exhibiting love; it is the prerogative of the brave.

It is vain for the coward to flee; death follows close behind; it is only by defying it that the brave escape.

A coward is much more exposed to quarrels than a man of spirit.

You cannot be a hero without being a coward.

The coward only threatens when he is safe.

What has violence ever accomplished? What has it ever created? No martyr’s cause has ever been stilled by an assassin’s bullet. No wrongs have ever been righted by riots and civil disorders. A sniper is only a coward, not a hero; and an uncontrolled or uncontrollable mob is only the voice of madness, not the voice of the people.

The coward wretch whose hand and heart Can bear to torture aught below, Is ever first to quail and start From the slightest pain or equal foe.

None but a coward dares to boast that he has never known fear.

Coward: One who, in a perilous emergency, thinks with his legs.

Freedom itself was attacked this morning by a faceless coward, and freedom will be defended.

A dog barks when his master is attacked. I would be a coward if I saw that God’s truth is attacked and yet would remain silent.

Despair gives courage to a coward.

The brave man inattentive to his duty, is worth little more to his country than the coward who deserts in the hour of danger.

Luck is everything… My good luck in life was to be a really frightened person. I’m fortunate to be a coward, to have a low threshold of fear, because a hero couldn’t make a good suspense film.

A team is where a boy can prove his courage on his own. A gang is where a coward goes to hide.

An Indian respects a brave man, but he despises a coward.

If I’m scared and I’m a coward, why do you guys want to see me fight?

I know you are here to kill me. Shoot, coward, you are only going to kill a man.

I’m a hero with coward’s legs.

It is a law of human nature that in victory even the coward may boast of his prowess, while defeat injures the reputation even of the brave.

Some people are cowards… I think by and large a third of people are villains, a third are cowards, and a third are heroes. Now, a villain and a coward can choose to be a hero, but they’ve got to make that choice.

Conscience is a coward, and those faults it has not strength enough to prevent it seldom has justice enough to accuse.

Cold and fire has a way of creeping into the tiniest crack in your courage and finding that coward.